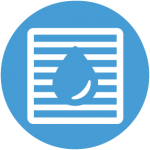 Chilled Water Systems oversees the operation of one of the most sophisticated chilled water generating systems in the world. Chilled water is used to cool buildings and equipment and is provided by either the district cooling system comprised of a network of chiller plants and underground piping or by standalone chillers dedicated to individual buildings.

The district cooling system for the main campus consists of five chiller plants with a combined capacity of 50,000 tons. The plants are interconnected by underground piping and operated as one production system. From a single console, operators can manage and balance loads among the chiller plants, use capacity anywhere in the system and continue operating in critical areas despite cooling equipment failure or utility outages.

After it is chilled, the water flows into a loop piping system which distributes the water to bridge interface systems that control the flow of chilled water in and out of campus buildings. These bridge interface systems ensure that buildings receive and efficiently use the chilled water to meet their cooling demand. The distribution system can pump up to 100,000 gallons of chilled water per minute through more than 22 miles of underground piping and 150 individual building bridge systems. When the water has been used and has warmed, it is returned to a chiller plant to be chilled again.